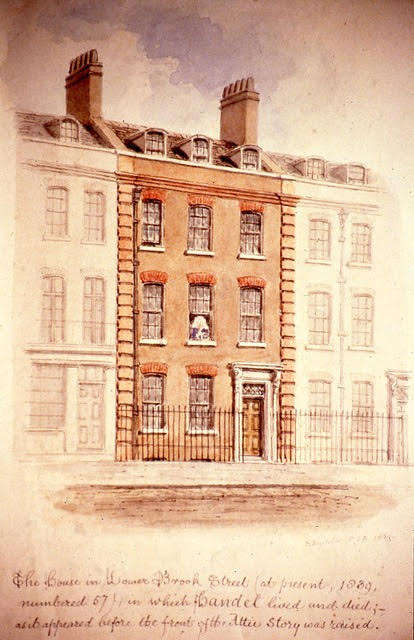 Handel moved into the new house at 25 Brook Street in spring of 1723, where he stayed the rest of his life, dying in his upstairs bedroom in 1759. Here Handel composed all of his music from the opera Guilio Cesare to his last major work, the oratorio Theodora, including, of course, Messiah. Here his neighbors were able to hear the music come alive during rehearsals with his star singers. After Handel’s death, the house changed hands many times, serving primarily as a residence for more than a century. In 1905, however, the art dealer C.J. Charles turned it into a shop, and, over some objection, removed the original brick façade of the first two floors, creating two stories of shop windows. The second story brick front was restored in 1975, at which time the house took on the same façade as other houses on the now largely commercial street (see image right).
With the establishment of the Handel House Trust in the 1990s an effort was undertaken to raise funds toward the acquisition and restoration of the house, and in 2001 the Handel House Museum opened on the upper floors of 25 and 23 Brook Street. After acquiring a 999 year lease for the entire house at 25 Brook Street in 2007, a Master Plan was developed for for the full restoration of Handel’s house and the upper floors of 23, including the restoration of Jimi Hendrix’s flat. In the first phase of this plan, 23 Brook Street was expanded in the rear, parallel to the late 18th-century bow extension at the back of Handel’s house, in order to provide a large events room for lectures, concerts, and school visits, and a purpose-built office space, which made possible the full restoration of the Hendrix flat in 2016. The second phase of the Master Plan, now underway, will not only restore the ground floor and basement kitchen of Handel’s house, making these spaces newly available to museum visitors, but will also bring back the original brick façade of the house to the street and allow visitors for the first time to enter from Handel’s front door (see image, Donations).
Handel & Hendrix in London closed at the end of September 2021 and will reopen in March 2023 on the 300th anniversary of Handel’s moving in. To help support this final stage of restoration and make a contribution toward opening Handel’s front door, please click on the Donations link.

▲
▼
For more information on the house and its history click here. 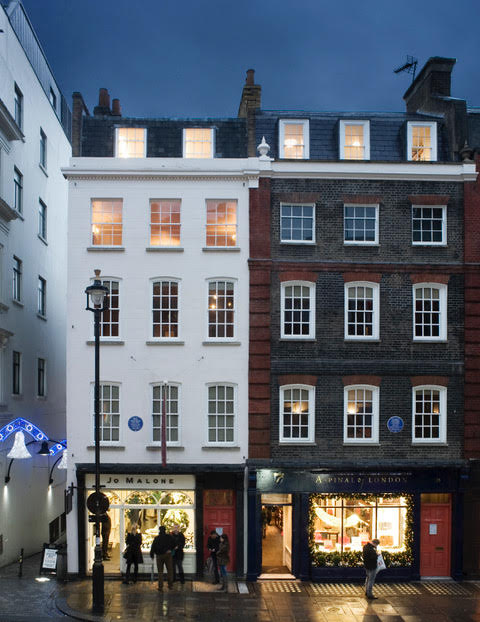 For credit card and paypal

Checks may be sent to: 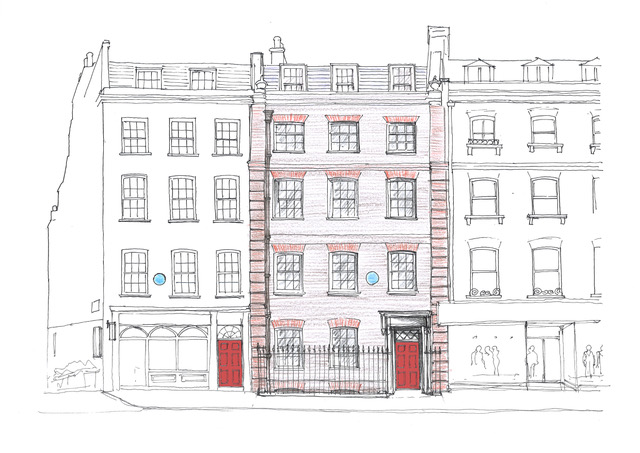